What do trees, pies and lemonade stands have in common? In a recent Math 2 class, students used all three to communicate information about patterns during their “Carousel” activity.

To begin the activity, groups of 9th- and 10th-graders in Bree Pickford-Murray’s class approached whiteboards around the classroom with markers in hand. Their first step was to express a given pattern using words; phrases ranged from “The pattern is linear, and the y-value increases positively by .5 after each time the x-value increases by 1” to “A linear pattern that goes up by 4, starting at 1.”

After setting up this written groundwork, each team rotated to the next board. Their next challenge was to visually depict each board’s written phrase. While these creative representations spanned the gamut from trees and pies to boxes and faces, the concept behind each team’s image was the same: these drawings represented another way to communicate information about each pattern.

For the rest of the 80-minute block, the class went around the classroom carousel. Adding in “now-next” equations, graphs and tables, each whiteboard was home to five different depictions of the same pattern by the end of the activity.

Check out the photos below to see Math 2 students working collaboratively to solve problems and represent patterns – and having fun doing it. 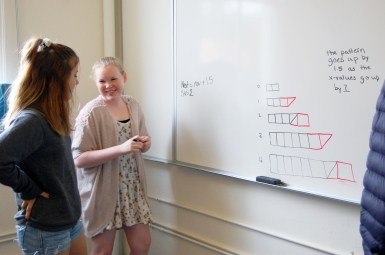 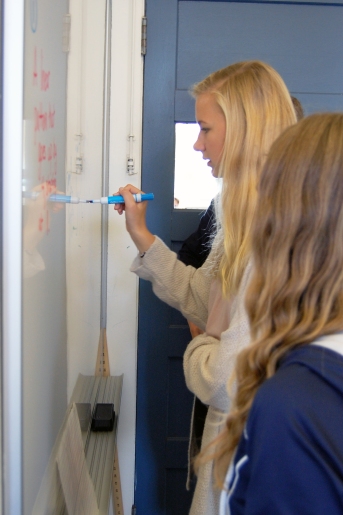